Since Harry Duchesne became executive director of Audio Journal in June, he’s been hearing some things that have him enthused. And it’s not just the programs broadcast by the nonprofit radio reading service for the blind and visually/print impaired located in the Seven Hills Building at 799 West Boylston St. in Worcester. Duchesne has also been liking what he’s hearing from listeners and the many volunteers whose efforts make the Audio Journal’s programming and very existence possible.  “There’s a lot of good energy here,” Duchesne said. “In the big picture of things, we’re a small nonprofit, but this means the world to them.”

As he was being interviewed in his office, two volunteer readers in one of the two recording production studios on West Boylston St. were reading stories from the Telegram & Gazette. The T&G readings are Mondays to Fridays from noon to 2 p.m. and 7 to 9 p.m. and are one of Audio Journal’s most popular programs, Duchesne said. Similarly, community news readings from smaller papers covering area towns have a strong following. Audio Journal also ventures into areas such as radio theater with the program “Radio Active Theatre,” and books with “Speaking Volumes.”

The latter, a book discussion program, received national exposure in 2019 when it was featured in The Oprah Magazine.

That publicity notwithstanding, Duchesne said of Audio Journal, “It’s like we’re one of the best kept secrets of Worcester.”

A few weeks ago, Duchesne wasn’t expecting to be executive director of Audio Journal. “I didn’t apply,” he said.

He credits his daughter with getting him the job — half-jokingly, or maybe not.

The Audio Journal board had been seeking to fill the position for several months, Duchesne said.

A couple of doors down from the Audio Journals offices and studios are offices for YOU, Inc., a behavioral health and education agency where Duchesne’s daughter, Solana Bethell, works.

Tom Gittins, president of the board of Audio Journal, was at 799 West Boylston St, when he had a chat with Bethell by YOU Inc.’s door which has a sign “Career Pathways of YOU, Inc.” The two ended up talking about Gittins’ search for an executive director. Duchesne wasn’t a YOU, Inc. Career Pathways candidate, but Bethell told Gittins, “‘I’ve got the right guy for you,’” Duchesne said. It seemed like her dad ticked off a lot of Audio Journal boxes.

In an announcement about Duchesne’s appointment, Gittins noted that “With experience as a teacher, volunteer organizer and community networker Duchesne was a standout candidate … As a person who lives with a vision impairment himself, he is uniquely tuned to the needs of our listeners. He frequently can be seen walking around town or taking the bus to stops, markets and shops.”

Originally from New Jersey, Duchesne said he was working at St. John’s University in Queens, New York, organizing retreats on nonviolence, when frequent trips to the Northeast made him say to his late wife, “Let’s move up there.” So, the young family — also including his son, Isaiah Bethell — moved here.

He said he met Lombardi “a long time ago” when Duchesne was program director for Young Neighbors in Action, a faith-based learning service program that takes place in the summer.

Duchesne has also been assistant director of Urban Missionaries (“The Little Store” in Worcester); director of housing and stabilization at the New England Farm Worker’s Council in Holyoke, working on behalf of the homeless; and a board member of Rebuilding Together Worcester.

Duchesne has an amiable manner and sense of humor but has faced some serious challenges in his life.

Five years ago, he suffered a stroke, but there are no outward signs of impairment, and he seems hale and hearty. However, the stroke did affect his “middle peripheral vision on the left,” he said. Which means he can’t drive.

There are about 5,000 people in Central Massachusetts who are legally blind, and many more who, like Duchesne, have some visual impairment. Duchesne also noted that there are people physically unable to hold a book because they suffer from diseases such as Parkinson’s Disease. Audio Journal seeks to serve them all. “It serves more people than we think it does,” he said.

People also tune in simply because they like the programs.

Another of the Audio Journal’s regular services has been live audio descriptions of shows at The Hanover Theatre and Conservatory for the Performing Arts.

The Audio Journal began broadcasting in 1987 with five volunteers from an unused closet at the Worcester Public Library. It is one of six radio reading services in the state and is affiliated with The Massachusetts Audio Information Network and the International Association of Audio Information Services. Audio Journal is a sub-carrier, meaning it “piggy backs off (radio station) WICN’s signal. We don’t have a license with the FCC,” Duchesne said.

Still, the Audio Journal broadcasts 24 hours a day, with about 50% of its own programing and the rest from outlets such as the Talking Information Center, a large radio reading service in Marshfield, Duchesne said.

With state restrictions following the pandemic, volunteers had to remotely record from their homes for a while.

Now, “Fifty percent came back and 50 percent record at home. I’m hearing volunteers saying, ‘I’d like to come back.’ It’s just amazing how dedicated these people are,” Duchesne said. “I’m excited about what we will accomplish together, especially with all our dedicated board members and volunteers.”

Frandsen worked with students and faculty at Worcester Polytechnic Institute to develop an Audio Journal App for iPhone or iPad.

In Audio Journal’s early days, you needed a special receiver to listen, but now the programing can be heard in a variety of ways, including from a receiver, smart speaker, via local public access cable TV channels, via landline phone, the Audio Journal APP, online at www.audiojournal.org, and via Facebook.

Among those Duchesne wants to listen are state legislators.

Duchesne is currently the one fulltime paid employee, and he also has a part-time program director.

“I want to change that one step at a time.”

But he also has to keep a watch on the steps that the state budget for fiscal year 2023 is taking. At the time of the interview, it appeared that the six radio reading services in the state would each be receiving $150,000.

Audio Journal has an annual budget of just over $250,000, Duchesne said. He’s only been on the job since June but, “what I do know is that every year we’re kind of hanging on to see if the state includes us.”

“We always have to get our local legislators to sponsor us,” Duchesne said.

He’s been quick to make himself known. “Not only cold calling but keep them informed,” he said. “When I worked with homeless families (for the New England Farm Worker’s Council) I would bring homeless families to the State House. I really do believe that legislators want to know (what’s happening).”

He has also already told U.S. Rep. James P. McGovern of Worcester, “‘I’ll have you in for an interview.’” Duchesne said he has walked into a good situation as Audio Journal’s executive director and has talked with Frandsen and Lombardi.

“Mary (Frandsen) has all this enthusiasm. I’ve talked to her and Vince (Lombardi) already. They both had this unique love of the radio station. Mary and Vince left a strong foundation for the Audio Journal. I’m very lucky. Not to mention the fact I inherited these wonderful volunteers. Over 100 volunteers, mostly seniors, they love to read the newspapers, love to read books.”

Duchesne said among his goals are adding new programming. One program would be “meditational readings,” plus “I want to interview local musicians,” he said.

Some popular programs that were temporarily lost to the pandemic are also returning, including “African American Experience” hosted by Tina E. Gaffney. “Tina Gaffney’s coming back,” Duchesne said.

During the day about 75% of Audio Journal’s programming is locally produced as things stand. “Our audiences love that,” Duchesne said.

On a not just technical matter, Duchesne said he is looking to upgrade Audio Journal’s equipment, which in some instances is 20 years old.

But he said, “first and foremost I want to reach out to the listeners and our volunteers.” He’s planning an event to recognize volunteers in September.

“I also want to add to our volunteers. I’d love to have college and high school volunteers,” Duchesne said. 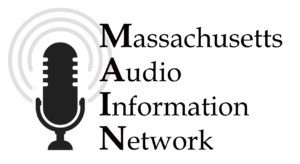